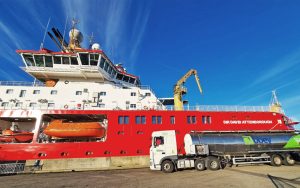 Abbey Logistics was on hand to support the final preparations for polar research ship the RRS Sir David Attenborough ahead of its maiden voyage to the Antarctic.
The ship, named after the TV naturalist and BBC presenter Sir David Attenborough, has spent the past year in shake-down trials around the British coast and is now in final preparations for its first ocean voyage to Antarctica for the new austral summer research season.
The vessel was in Harwich International seaport in Essex and Abbey was on site delivering more than 100,000 litres of purified water to be used onboard during its first expedition.
At 129 metres long, this state-of-the-art vessel is designed to support research in extreme environments, thanks to a wide range of specialist scientific facilities, instruments and laboratories that enable scientists to conduct multi-disciplinary sciences to study the ocean, seafloor, ice and atmosphere.
Onboard, the ship will carry marine robotics and remotely operated vehicles – including the famous Boaty McBoatface to capture data from the deep ocean. To support this, it has been built as a Polar Class 4 icebreaker, meaning it can crash through metre-thick ice floes at a steady pace without sustaining serious damage, enabling it to get to previously inaccessible areas for a vessel this size.
It also has a helipad, cranes, and accommodation for a crew of up to 30 people and 60 scientists and support staff, giving it everything it needs to be a self-sustaining research ship.
The vessel’s primary objective is to understand how the Earth’s atmosphere and oceans are warming, and the impacts the temperature rise will have on the ice-covered waters and lands of the Arctic and Antarctic.
Abbey Logistics CEO Steve Granite said: “We are extremely proud to have played a very small role in the final preparations of this important ship’s maiden voyage.
“We wish all the scientists and support crew bon voyage on their first Antarctic trip and we look forward to learning about their findings which will be of huge significance to us all.”