UK Government under pressure to act over tanker driver shortage 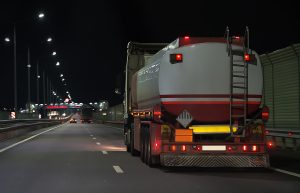 Calls have been made for the relaxation of immigration rules to tackle the HGV driver and tanker driver shortage crisis.
The UK's Road Haulage Association is continuing to plead for truck drivers to be included on the Shortage Occupation List as a short-term measure to ease the pressure on the UK supply chain while a UK-based workforce is trained up.
The country has a shortage of around 100,000 drivers following the double impact of COVID-19 and Brexit that saw many European workers return to the continent.
This has left supermarket shelves empty as food supplies have not been able to be delivered while the shortage has also forced petrol stations to close due to the inability to replenish fuel stocks.
Duncan Buchanan, RHA policy director for England and Wales, added that work in the haulage industry was an attractive career for people, but that it is taking a long time to get trained.
He said: "We’re calling for government to make training to be an HGV driver more accessible and more affordable, as we tackle the UK’s shortage."
Transport Secretary Grant Shapps hit back and said Brexit was not to blame for the current HGV driver shortage that has hampered the UK’s supply of petrol and diesel.
He told Sky News: “I have seen people point to Brexit as the culprit here when in fact they are wrong. Not only are there very large and even larger shortages in other EU countries like Poland and Germany, which clearly can’t be because of Brexit.
“But actually because of Brexit I have been able to change the law and alter the way our driving tests operate in a way that I could not have done if we were still part of the EU.
“So Brexit has actually provided part of the solution of giving more slots available to HGV tests and a lot more, twice as many available as before the pandemic."
Earlier in the summer the bosses of leading haulage company sent a letter to Prime Minister Boris Johnston and raised these concerns that have come true.
The letter said intervention from government was now the only way to avert "critical supply chains failing at an unprecedented and unimaginable level".
The letter was signed by the CEOs of a raft of logistics groups, including Eddie Stobart, Wincanton, XPO Logistics and KUEHNE + NAGEL, as well as the heads of industry groups including the Food and Drink Federation, British Frozen Food Federation, Cold Chain Federation, British Beer and Pub Association and the British Meat Producers Association.

cleaning
Van den Bosch buys hundreds of new tank containers
Van den Bosch is expanding its deep-sea activities with the purchase of 500 additional 20 ft tank containers. These ISO tank containers were immediately put into use, which enables the logistics service provider to respond to the growing demand from the African market for deep-sea transport with ISO tanks for the food industry. Van den Bosch runs its deep-sea activities... [Read More]
cleaning
Driving towards uniformity
As part of the chemical and food logistics chain, the European Federation of Tank Cleaning Organisations (EFTCO) and its associated cleaning stations have always focused on their responsibilities for food safety, hygiene and of course, sustainability. Becoming more environmentally friendly and cutting waste has become an urgent priority. That is why the ECLIC board,... [Read More]
cleaning
Boasso Global officially opens new headquarters
Boasso Global, a provider of cleaning, depot, maintenance and transportation services for the ISO tank container industry, has officially opened its new headquarters. The grand opening celebration in the Water Street Tampa community was held on 11 January and was attended by Boasso Global’s team, Tampa Bay’s Mayor Jane Castor, Tampa Bay Chamber of Commerce members,... [Read More]
cleaning
Dinges Logistics expands fleet with reachstacker
Dinges Logistics has expanded its fleet with an additional reachstacker for empty containers. This decision is based on the fact the company opened another site last year, which offers an additional logistics space of approximately 15,000 square meters. The storage capacity for empty containers has now been increased. In order to still ensure proper logistical processes... [Read More]
cleaning
Tank cleaning professionals from Hamburg
Wilhelm Ernst, or Ernst Logistiks, has been running successfully since it started in the road haulage business in 1928. The family business developed and evolved from the transportation of bitumen in the 1950s and the transportation of silo products such as flour in the 1960s to becoming a provider of broad logistic services for tank trucks and tank containers. The... [Read More]
cleaning
Vopak and Hydrogenious LOHC Technologies take hydrogen logistics to next level
Vopak and Hydrogenious LOHC Technologies have agreed a joint venture for hydrogen storage, transport and supply. LOHC Logistix will be based on Hydrogenious’ Liquid Organic Hydrogen Carrier (LOHC) technology. Located in Germany, it will support both parties to facilitate their efforts to supply green hydrogen to off-takers, using LOHC-based transportation via ship,... [Read More]
cleaning
Prominent player in the tank cleaning market
Claessen Tankcleaning Venlo have been passionately focusing on the internal and external cleaning of road tankers, tank containers, bulk trucks, trailers as well as IBC containers for the past 22 years, . The Dutch-based firm cleans a range of products from food as well as non-food items. The company also prides itself in the cleaning of toxic or heavy reactive goods,... [Read More]
cleaning
Back on the road swiftly as idling is costly
Maximum utilisation can only be guaranteed if tankers and vehicles are quickly back on the road. Industrial and commercial containers are not only filled and emptied repeatedly during their life cycle. Depending on how they are used, they also need to be cleaned regularly to remove contamination such as food residues, latex, limescale, rust, cement, copper debris,... [Read More]
Feature
All systems go
Moreno Romanini, technical manager at OMZ, speaks to Tank Cleaning Magazine, about its successes and challenges the company faces. Can you tell us a bit about your containers that are used within tank washing plants and can you explain how they work? At OMZ, we help meet the needs of our customers to speed up assembly operations by creating thermal and pumping plants... [Read More]
cleaning
Bertschi expands multimodal transport and storage facilities
Bertschi Group has doubled its terminal capacity at the ValuePark Terneuzen to meet the growing market demand for storage and intermodal solutions. The Swiss chemical logistics company Bertschi Group has built a network set up for rail, road and waterway transportation throughout Europe. Bertschi opened its 12,000m2 rail terminal at ValuePark Terneuzen in May 2008.... [Read More]