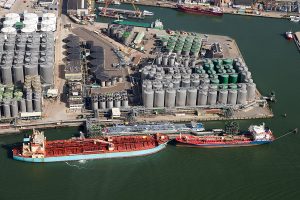 Vopak has reported a full-year 2021 revenue of €1.23 billion, up from €1.19 billion in 2020.
The proportional occupancy rate for 2021 was 88%, down slightly from 90% in 2020, which the company said reflected soft market conditions in oil and chemicals in the Netherlands and Singapore.
Vopak added 600,000 m3 of capacity in 2021, including at its Sydney, Australia, and Deer Park, US terminals, and the greenfield industrial terminal in Qinzhou, China.
Some losses were sustained as a result of impairment of the Panama terminal, and a write-off of business development costs at joint venture Vopak Moda Houston and the German LNG project, as well as a partial dilution of the company’s Chemtank share and a partial release of a tax provision in a joint venture terminal within the Asia and Middle East division.
New Vopak CEO Dick Richelle, whose term began on 1 January, said that 2021 had been another “atypical” year due to the pandemic, but despite this, the company has shown its resilience with close to record high EBITDA.
He said: “We realised good progress on our portfolio and growth agenda by actively positioning ourselves towards the future.
“We reached new milestones in industrial terminals, mainly on the US Gulf Coast and China. We delivered new storage capacity and infrastructure in main industrial clusters in Belgium, Mexico, USA, the Netherlands, Australia,’ he says. ‘Gate terminal, our successful joint venture with Gasunie for LNG in Rotterdam, is making an important contribution to the security of natural gas supplies in the Netherlands and Northwest Europe supplying the equivalent of 25% of the Netherlands’ gas needs. Gate terminal will add 12.5% additional send out capacity to serve increased demand by the end of 2024.”
In 2022, Vopak expects growth investments to be below €300 million. Investments will be in existing committed projects, new business development, the partnership with Aegis to operate eight LPG and chemical storage terminals in India, its new LNG terminal in Hong Kong, which will be run in a joint venture with Mitsui OSK Lines (MOL) and pre-final investment decision (FID) feasibility studies in new energies including hydrogen.

cleaning
Van den Bosch buys hundreds of new tank containers
Van den Bosch is expanding its deep-sea activities with the purchase of 500 additional 20 ft tank containers. These ISO tank containers were immediately put into use, which enables the logistics service provider to respond to the growing demand from the African market for deep-sea transport with ISO tanks for the food industry. Van den Bosch runs its deep-sea activities... [Read More]
cleaning
Driving towards uniformity
As part of the chemical and food logistics chain, the European Federation of Tank Cleaning Organisations (EFTCO) and its associated cleaning stations have always focused on their responsibilities for food safety, hygiene and of course, sustainability. Becoming more environmentally friendly and cutting waste has become an urgent priority. That is why the ECLIC board,... [Read More]
cleaning
Boasso Global officially opens new headquarters
Boasso Global, a provider of cleaning, depot, maintenance and transportation services for the ISO tank container industry, has officially opened its new headquarters. The grand opening celebration in the Water Street Tampa community was held on 11 January and was attended by Boasso Global’s team, Tampa Bay’s Mayor Jane Castor, Tampa Bay Chamber of Commerce members,... [Read More]
cleaning
Dinges Logistics expands fleet with reachstacker
Dinges Logistics has expanded its fleet with an additional reachstacker for empty containers. This decision is based on the fact the company opened another site last year, which offers an additional logistics space of approximately 15,000 square meters. The storage capacity for empty containers has now been increased. In order to still ensure proper logistical processes... [Read More]
cleaning
Tank cleaning professionals from Hamburg
Wilhelm Ernst, or Ernst Logistiks, has been running successfully since it started in the road haulage business in 1928. The family business developed and evolved from the transportation of bitumen in the 1950s and the transportation of silo products such as flour in the 1960s to becoming a provider of broad logistic services for tank trucks and tank containers. The... [Read More]
cleaning
Vopak and Hydrogenious LOHC Technologies take hydrogen logistics to next level
Vopak and Hydrogenious LOHC Technologies have agreed a joint venture for hydrogen storage, transport and supply. LOHC Logistix will be based on Hydrogenious’ Liquid Organic Hydrogen Carrier (LOHC) technology. Located in Germany, it will support both parties to facilitate their efforts to supply green hydrogen to off-takers, using LOHC-based transportation via ship,... [Read More]
cleaning
Prominent player in the tank cleaning market
Claessen Tankcleaning Venlo have been passionately focusing on the internal and external cleaning of road tankers, tank containers, bulk trucks, trailers as well as IBC containers for the past 22 years, . The Dutch-based firm cleans a range of products from food as well as non-food items. The company also prides itself in the cleaning of toxic or heavy reactive goods,... [Read More]
cleaning
Back on the road swiftly as idling is costly
Maximum utilisation can only be guaranteed if tankers and vehicles are quickly back on the road. Industrial and commercial containers are not only filled and emptied repeatedly during their life cycle. Depending on how they are used, they also need to be cleaned regularly to remove contamination such as food residues, latex, limescale, rust, cement, copper debris,... [Read More]
Feature
All systems go
Moreno Romanini, technical manager at OMZ, speaks to Tank Cleaning Magazine, about its successes and challenges the company faces. Can you tell us a bit about your containers that are used within tank washing plants and can you explain how they work? At OMZ, we help meet the needs of our customers to speed up assembly operations by creating thermal and pumping plants... [Read More]
cleaning
Bertschi expands multimodal transport and storage facilities
Bertschi Group has doubled its terminal capacity at the ValuePark Terneuzen to meet the growing market demand for storage and intermodal solutions. The Swiss chemical logistics company Bertschi Group has built a network set up for rail, road and waterway transportation throughout Europe. Bertschi opened its 12,000m2 rail terminal at ValuePark Terneuzen in May 2008.... [Read More]